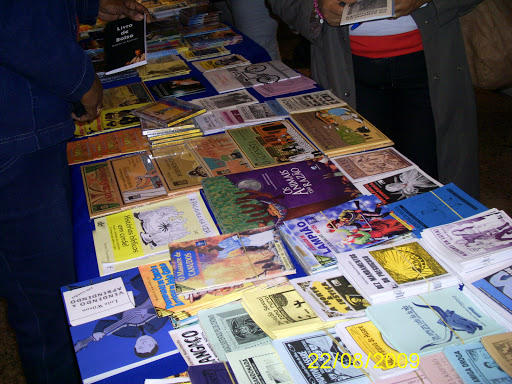 The American Folklife Center at the Library of Congress is sponsoring a symposium entitled “Literatura de Cordel: Continuity and Change in Brazilian Popular Literature,” in collaboration with the Library’s Hispanic Division, the Library’s overseas office in Rio de Janeiro, and the Embassy of Brazil in Washington, DC. Additional support and assistance is provided by the Library's Poetry and Literature Office.
The symposium will take place on Monday, September 26 and Tuesday, September 27, 2011. Attendance is free of charge, but registration is required. For a complete schedule and to register online, visit: [http://www.loc.gov/folklife/Symposia/litcordel/] Please reserve your place today!
Literatura de cordel, literally “string literature,” refers to popular booklets or chapbooks originally hung along cords strung across marketplace stalls to attract buyers. A tradition brought from Portugal to northeastern Brazil in the sixteenth century, literatura de cordel features traditional poetry on many topics, often illustrated by eye-catching woodblock images. Today, cordel poems are no longer found solely in northeastern Brazil, but also in the larger cities of São Paulo and Rio de Janeiro. In addition to being printed in traditional chapbook fashion, they are found widely on the Internet.
“Literatura de Cordel: Continuity and Change in Brazilian Popular Literature,” will draw attention to the American Folklife Center’s collections of Brazilian literatura de cordel, which are among the most extensive in the world. The symposium will also examine the artistry, narrative, and iconography of cordel. Noted scholars of cordel will be featured, as will the artistry of cordel poets, singers, and woodcut artists.